Marblehead home prices set a record in the first Quarter of 2016, with the median price of $660,000 equalling the record quarterly number in Q3 2015. But……the first quarter is almost always the lowest quarter in terms of the number of sales and, consequently, the quarter most likely to be distorted by the pattern of sales.

The goal of this blog is twofold: to report the numbers, and to interpret them. The second is the more important goal, since there are many, often automated, sources of bare bones numbers, but far fewer analyses and commentaries on the numbers. 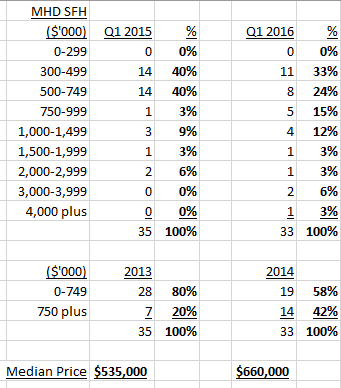 And in chart form: 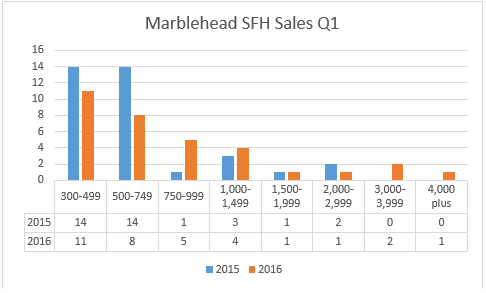 Commentary
In the first several months of 2015 the surprise, at least to me, was the lack of activity at the higher end in Marblehead. That changed as the year went on, and in Q1 2016 we are seeing some of that effect as sales agreed last year closed in this one. We have already had 3 sales over $3 million (1 over $4 million) and one just below that level.

As a market strengthens, so it is reasonable to expect that sales will move up into higher brackets. Note that sales between $750,000 and $1 million increased from 1 to 5, and that all sales over $750,000 doubled year over year.

While, because of the small number, I believe caution is needed as to the absolute number of the median price to start 2016, there is no doubt that the sales activity in Q1 is indicative of a healthy market. For the reasons I have mentioned it is quite likely that Q1 will see the highest median price for the year, something which last occurred in 2008 and we do not want to relive that year!

I have suggested before that 2016 may be the year when we see homeowners in Boston cashing in their profits and heading to the ‘burbs – and if you are going to move to the ‘burbs what better place to go than historic, idyllic (definition: peaceful, happy and enjoyable) Marblehead! Already this year a large percentage of buyers attending Open Houses are coming from Boston, suggesting that 2016 will be a good year for the real estate market here.

Read  Which broker should list my house for sale?