Why are mortgage rates plummeting?

Freddie Mac’s national average 30 year Fixed Rate Mortgage dropped to 3.99% this week, but with interest rate falling sharply later in the week that number is likely to drop further this week, perhaps to 3 7/8%.
Why are rates falling?
Let us look at two charts:FRM and the US Treasury 10 year (10T) yield. 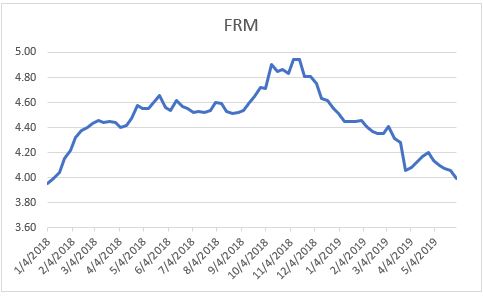 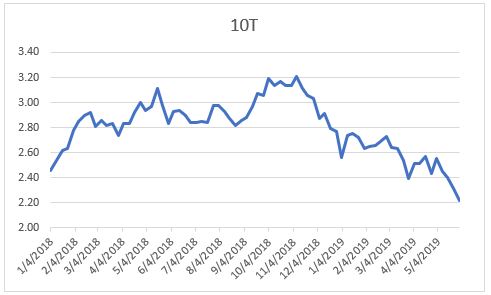 Mortgages are bundled together and sold to investors. Because mortgage are riskier than US Treasuries investors demand a premium to the yield on 10T. This premium is known as the spread. In recent years that spread has averaged around 1.7%. Add that to the 10T yield and you get a pretty good idea of where FRM will be.

This is the what, but now the why. Why are interest rates plummeting?

In broad terms, the yield on 10T reflects two main factors: the outlook for the US economy and the demand by investors for a “safe haven” in a time of uncertainty.

I have written several times in recent months that the outlook for the US is a slowing, but still growing economy, and for a stable housing market. It is clear that the world economy is slowing and also that increased tariffs are contributing to that slowing – and to growing uncertainty.

This blog tries to stick to real estate and economic commentary so I will just quote from an Editorial in yesterday’s Wall Street Journal headed Tariff Man Unchained: “The biggest economic risk of a Donald Trump Presidency has always been that his trade obsessions would swamp the benefits of tax reform and deregulation. For two years he has kept his worst protectionist impulses mostly in check, but as he seeks a second term we are now seeing Tariff Man unchained. Where he stops nobody knows, which is bad for the economy and perhaps his own re-election.”

It may be that the President feels that traditional diplomacy has been to the advantage of other countries (although the US is still the richest country in the world) and that he can use the bully pulpit to change the balance of trade. The danger of using the bully pulpit is that those who are bullied tend not to like being bullied and have long memories. And the Chinese in particular have not only long memories but long time perspectives.

The WSJ article ends: “But then Tariff Man is impulsive and often his own worst enemy. Equities have fallen for six straight weeks and corporate profits are down. The job market is strong, but that isn’t guaranteed if investment starts to lag. Senate Republicans need to get off their sedan chairs and send this President a message on trade, or they may be in the minority in 2021.” And that prospect may well influence the way the rest of the world responds to the latests threats.

The natural tendency and hope is that all these issues will blow over quickly and not have a damaging effect on the economy. But the bond market is sending out warning signals.