Why have Mortgage Rates dropped?

The Freddie Mac weekly index of the 30 year Fixed Rate Mortgage (FRM) has dropped from 4.94% to 4.63%, a fall of 0.31%, over the last month. Regular readers of this blog are aware that the FRM closely tracks the yield on the Government 10 year Treasury Note (10T) and so will not be surprised to learn that in the same period the yield on 10T has dropped from 3.24% to 2.91%, a fall of 0.33%. And note that the Fed Funds rate, which is controlled by the Federal Reserve, has been unchanged during this period. While it is widely expected that the Fed Funds rate will be increased by another 1/4% this coming Wednesday, this increase will have no direct impact on the FRM, although it may well have on Adjustable Rate Mortgages.

For an explanation of the link between the FRM and 10T read Mortgage rates head for 5% .

The question of why mortgage rates have dropped becomes, therefore, why the yield on 10T has dropped.

What drives the yield on the 10 year Treasury?
In general terms, the yield on the 10T is seen as a reflection of the outlook for the US economy and inflation, but it is also influenced by the demand for Treasuries from domestic and international investors seeking a “safe haven” in times of uncertainty.

Outlook for the US economy
The argument for the huge tax cuts earlier this year was that they would encourage investment which would lead to much higher economic growth than we have seen in recent years. The Administration talked of 4% growth, a figure it was claimed would lead to a reduction in the budget deficit, rather than the increase which would materialize if growth remained at the 2- 2.5% level. For my views last February and how this would influence real estate prices read What will happen to Home Prices in the Experimental Economy?

As 2018 draws to a close, it is clear that growth is slowing in many parts of the world. The US economy is performing strongly, although there are concerns about the impact a protracted tariff war with China could have on growth.

The chairman of the Federal Reserve has made two statements about interest rates in recent weeks. The market interpreted the first as suggesting that there could be several more rate increases in 2019, and the second as suggesting there may be only one more. Mr. Powell’s remarks this coming Wednesday will be analyzed very carefully, especially to see if the Fed makes reference to a slowing in the economy.

Inflation
This is perhaps where there is the greatest divide amongst pundits. Despite all the reasons that inflation should be rising faster than it is, it isn’t. In recent months, the oil price has dropped sharply and that has been a restraining factor on the overall price level. Those who see no signs of inflation picking up steam argue that interest rates do not need to be increased further. The arguments for continuing to increase interest rates include concerns that the full employment level in the US must lead to wage pressures, while unless interest rates are allowed to return to the sorts of levels we have seen over the last 30 years or so, the Federal Reserve will not be in a position to lower rates to stimulate the economy if we are to enter the recession some economists are forecasting for as early as 2020.

Treasuries as a safe haven
Here is an article from The Balance explaining Who owns the National Debt. It makes interesting reading.
Regardless of all the theories about, for example, whether China will stop buying Treasuries as part of its tariff war with the US, the fact remains that yields on US Government securities are far higher than those offering in other developed and stable counties. 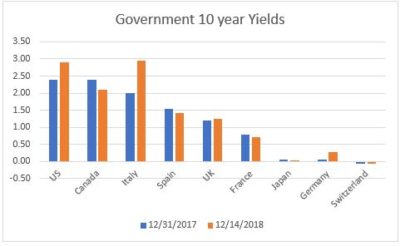 Note that the yield on the US 10T has increased this year, as the Treasury has had to sell more Notes and Bonds to finance the growing budget deficit.
The only other country showing a significant increase in yields is Italy which is embroiled in a dispute with the EU over its budget.
The biggest factor in safe haven buying is concern about geopolitical developments. In times of uncertainty, investors buy Treasuries. Assuming that the reader of this blog is not immune to the daily bombardment of developments domestically and internationally, I shall not list them here. Suffice it to say, we are going through a period of great uncertainty.

Summary
There are many uncertainties facing all markets at a time when the supply of homes for sale has been increasing for several months. While the economy remains strong and employment high, there is no obvious reason to expect home prices to fall significantly. It is likely that some buyers were over- optimistic (or desperate) earlier in the year and that we are now seeing greater equilibrium emerging in many markets between buyers and sellers.