Why have mortgage rates spiked?

While the Freddie Mac weekly survey for the 30 year Fixed Rate Mortgage (FRM) this week showed an increase of just 0.07% to 4.22%, that survey was based upon rates in the early part of a week which saw a major upward move in the yield on the US 10 year Treasury (10T). As regular readers of this blog know, the rate of the FRM is closely tied to the yield on 10T. Here is a recent chart of the 10T. 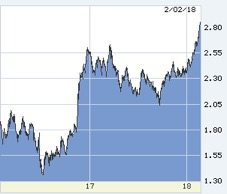 It is likely that the coming week will see Freddie Mac’s survey number come in close to 4.5%, after spending most of 2017 under 4%.

Why has the yield on 10T – and hence the rate of the FRM – suddenly spiked?

I’ll answer that with bullet points:
1. 10T reflects economic activity and expectations and the economy has been growing quite rapidly and now is being boosted by significant tax cuts.
2. Those tax cuts will add $1.5 trillion to the budget deficit, a sum that will need to be financed largely by selling Treasuries.
3. Historically low unemployment levels have not translated into higher wages – until now, with the annual increase reaching 3%.
4. The seeming lack of wage pressure led many to believe that inflation had been contained, and that the old economic belief that easy money would lead to higher inflation no longer held true. That complacency has been rudely shaken in the last few weeks.
5. After many years when the Federal Reserve was a major buyer of Treasuries, it is now a seller and increased its pace of sales in January.
6. In 2018 the Treasury will be increasing the amount it will be raising at a time when one of the major buyers – the Federal Reserve – has reversed direction.
7. For the first time in a long while, Europe is showing economic growth at the same time as the US, and the European Central Bank has also started to reduce its buying of Government Securities.
8. The dollar has been very weak in recent months, something which does not encourage foreign buying of US Treasuries.

The Federal Reserve has the twin mandates of maximizing employment and stabilizing prices, although recently the Fed has said it wants to see inflation of 2%. The Fed has already increased short-term rates 5 times and has forecast 3 more rate increases for 2018.

All in all, there is quite suddenly a lot of uncertainty and concern creeping into markets, as we saw with the sharp sell off in the stock market on Friday. In today’s world events can move very quickly, as we have seen with interest rates in 2018. Barring an unforeseen event which causes an economic slow down, it does seem that the era of easy and cheap money has ended.

For more detail about the impact of interest rates on mortgage rates read Why mortgage rates may be headed upwards – finally which I published last October.