It is important to bear in mind that only around 4% of Marblehead’s more than 6,200 SFHs change hands publicly in any year, but 4% is a reasonable sample, with sales taking place from $300,000 to $4 million. 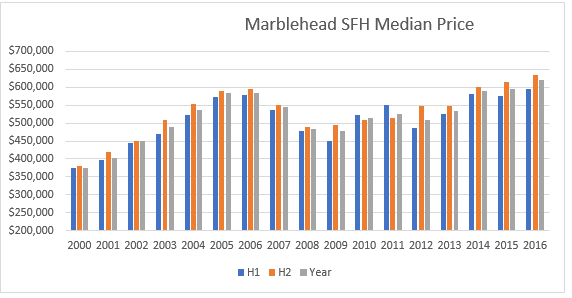 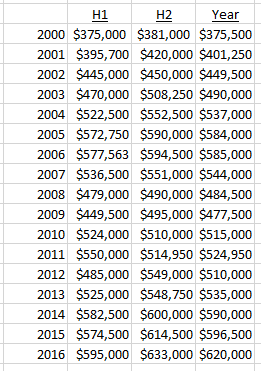 The quarterly numbers show how the market can vary from quarter to quarter. In the last 6 years the highest quarterly median price has been recorded once each in Q1 and Q2 and twice each in Q3 and Q4. 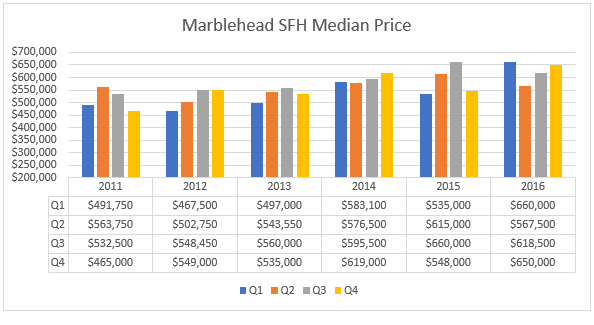 Sales
Sales have been more or less flat for the last 5 years, recovering from the slump of the Great Recession, but still not back to the levels of the peak years. There is little doubt that lack of supply has been holding back sales. 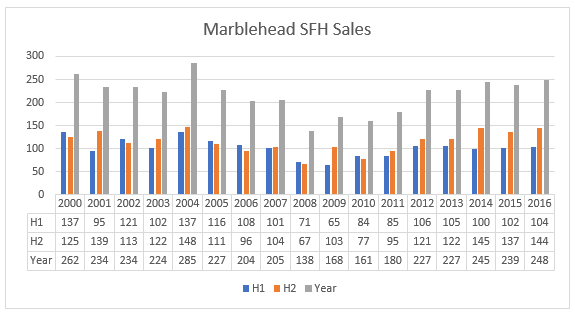 Within basically flat total sales there have been major shifts, with far fewer sales under $400,000, and big increases in all price brackets over $600,000.

Houses For Sale
The chart below demonstrates two things: the seasonality of supply, and the drop in SFHs for sale since 2014. 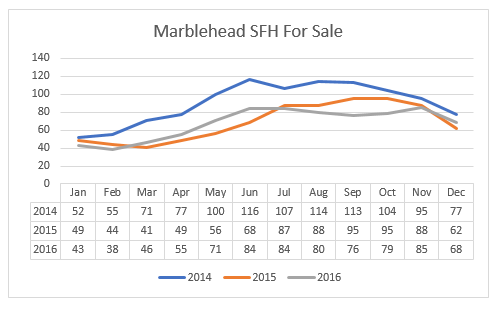 Assessed Value to Sales Ratio (ASR)
One way I measure prices is by the ratio (ASR) of Assessed Value (AV) to Sales Price (SP). The ASR is the AV divided by the SP: if the SP is rising (prices going up), the ASR will fall. In a period of rising prices the ASR is likely, as a lagging indicator, to be below 100%.

As we hope out properties are worth more than the AV an ASR below 100% as a positive sign. Remember that AVs are a lagging indicator: the tax bills that have just been sent out for FY2017 are based on actual sales in 2015. Thus the 2016 sales data, reported in this review, will be the basis for FY2018 assessments. Any my data compares 2016 sales with AVs based upon 2015 prices. 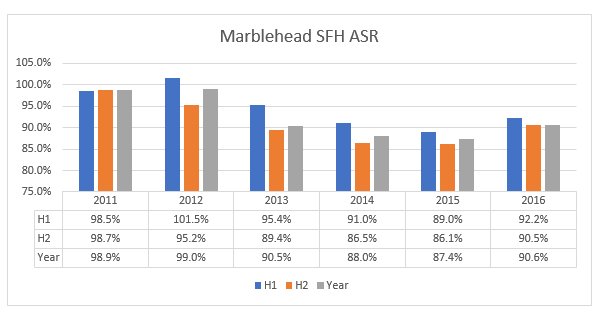 For the last 4 years the ASR has been around 90% or below, indicating that the median sale has been taken place at about a 10% premium to Assessed Value.

Outlook for 2017
Immediately after the Election I published What does the Election mean for real estate markets? in which I made the case:”The removal of a lot of strangling regulations and the end of gridlock in Congress will produce stronger economic growth. Major infrastructure spending will boost jobs and wages at the lower end, while lower corporate tax rates and lower personal tax rates will produce increased personal wealth. Interest rates will rise, reflecting the stronger economy, and the demand for housing will increase. Greater wealth and confidence will provide a boost to the higher end of the market.”
I have no doubt that 2017 will provide many surprises along the way, but with a stronger economy and low supply of houses for sale, there seems little reason for home prices in Marblehead not to continue their steady, but modest, upward movement.