Are mortgage rates headed to 3%?

At mid-year, as the Freddie Mac weekly survey produced a figure of 3.73% for the 30 year Fixed Rate Mortgage(FRM), it is timely to note both that the rate has come down sharply since late 2018 and also that there are some forecasts that it could go even lower.

The first chart shows the FRM weekly since the beginning of 2018. 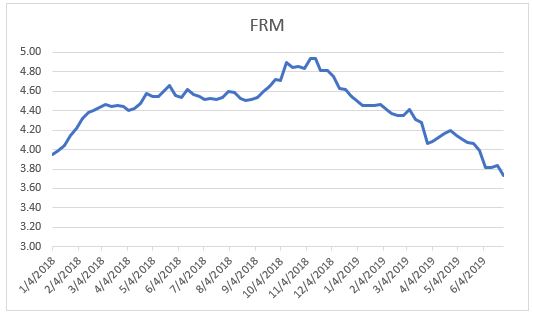 So what happened?
The most important aspect of mortgage rates to understand is that the FRM is based upon a premium – or spread – demanded by investors over what they can earn from investing in US Government Treasuries. The Federal Reserve sets the Fed Funds Rate – which is the basis for Prime Rate, which determines interest rates on credit cards, auto loans and adjustable rate mortgages – but the market sets the rate for the yield on the 10 year Treasury (10T), which is the main reference for FRM.
The FRM has been at a premium of about 1.7% over the 10T in recent years.

Why have interest rates dropped this year?
I addressed this in a recent post Why are mortgage rates plummeting? and there is a page on the website devoted to Mortgage Rates. Basically, the yield on 10T reflects three things: the outlook for the US economy (a rapidly expanding economy produces a greater demand for borrowing and interest rates tend to rise); geopolitical tensions (the “flight to quality” which sees interest rates drop as a result of the buying of US Treasuries as a “safe haven”); and relative yields compared with other developed countries.

I have been writing consistently since late 2018 that the outlook for the US economy is for a slowing, but still growing economy. At mid-year that still looks a good bet, tariffs notwithstanding.

There is no doubt that the world economy is slowing or that inflation has failed to appear as expected, while the world is awash in cash. Against that background the yield offered by US Treasuries is extremely attractive. The chart below shows the yields on 10 year Government Securities in 10 major countries. 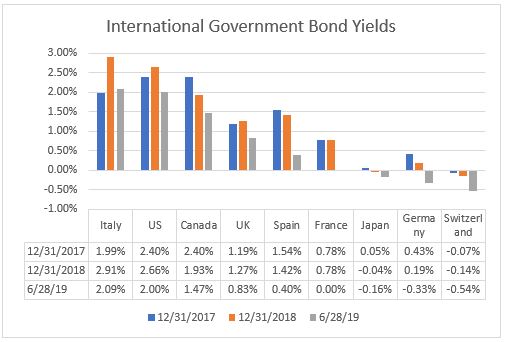 Startlingly, roughly 50% of all European Government debt carries negative yields, meaning that investors are paying for the privilege of owning the securities.

Will mortgage rates reach 3%?
At a time when the economic outlook can change in the time it takes one man to type 280 characters, it is really hard to make forecasts. Most economists and businessmen would say that uncertainty slows investment and there is plenty of uncertainty at the moment. To get to a 3% FRM, the yield on 10T would have to drop to around 1.25%. In July 2016 it reached 1.37%, so it is not impossible. Is it likely? Hand me my crystal ball – oh it’s gone all cloudy.