Why are Mortgage Rates so high?

Yes, interest rates are rising and with that so are mortgage rates, but the 30-year Fixed Rate Mortgage (FRM) seems to be about 0.5% higher than I would expect. 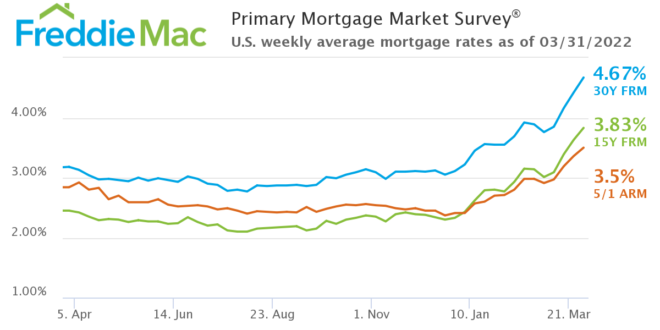 In my recent article The Federal Reserve and Mortgage Rates I explained the link between the FRM and the 10-year Treasury yield (10T). The difference – the spread – has average around 1.7% over time, but with significant fluctuations during periods pf stress.

Here is the chart highlighting the spread at the time of Federal Funds rate changes – and as of this week:

And now the last two years in more detail: 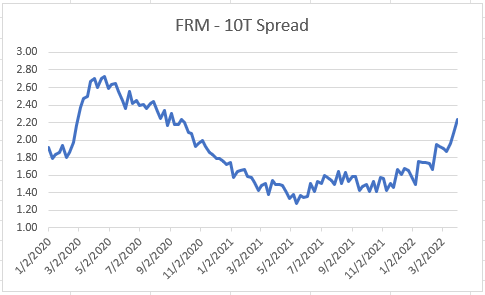 The spread in early 2020 was 1.8% but then, with the outbreak of COVID and worldwide lockdowns, liquidity slumped and the spread jumped sharply. The Federal reserve then embarked on its gigantic program of flooding markets with liquidity. That, combined with its purchase of Mortgage Backed Securities (MBS) (conventional mortgages are bundled and sold to investors as MBS) drove the spread down to the 1.4-1.6% range.

As the fed announced- finally, belatedly – its intention to wind down its purchases of MBS and raise interest rates, so the spread increased back to around 1.5% at year end – still below the years long average of 1.7%, but the Fed was still buying MBS.

So something is awry. Often, when mortgage demand slackens – and there is no evidence yet that that is happening – lenders compete on rates to generate business.

My research yesterday did not produce an answer to this conundrum, so at this stage I am merely flagging the anomaly. But I will investigate further and see if I can get a better answer next week.