Where are rates now?
Here are this week’s rates, with the 30 year fixed rate mortgage (FRM) at a new 3 year low: 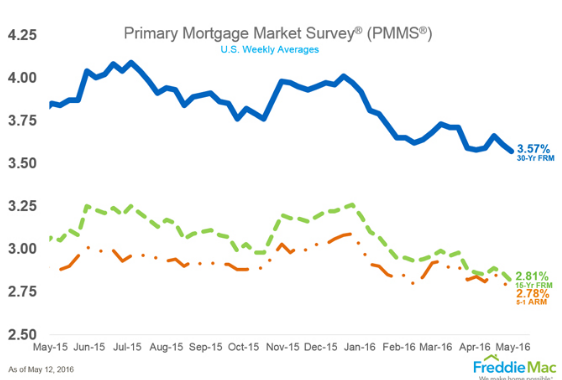 What are the “experts” forecasting?
The Mortgage Bankers Association (MBA) has been forecasting for the last 2-3 years that mortgage rates would soon increase to 5% or more.

Why are the “experts” so wrong?
The FRM is based, not on short-term interest rates over which the Federal Reserve has influence, but on  the yield on the 10 year US Treasury (10T), whose price is influenced by a number of factors, notably the anticipated strength of the economy, yields compared with other countries, and geopolitical developments around the world.

When the Fed increased short-term rates last December, the yield on the 10T was 2.25%. On Friday it closed at 1.71%, a change of more than half a per cent. In the same period,the FRM has dropped 0.4%.

The reason the MBA keeps getting the forecast for the FRM so wrong is that it keeps forecasting that the yield on the 10T is going to increase. Its latest FRM forecast assumes a 10T yield of 2.2% by the end of 2016 and 2.9% by the end of 2017. These forecast rates have dropped from 2.7% and 3.3% just since January.

But it is not just the MBA that gets interest rates wrong. The Fed was so concerned about being “transparent” and explaining, ad nauseam, its thinking on interest rates in order not to “surprise” the market, that it missed the opportunity to raise rates when the US economy was strong and did so just as it became apparent that the continued weakness in the rest of the world was leading to lower interest rates elsewhere, not higher.

Interest rates have long been higher in the US than in most of the rest of the world, leading to demand for US Treasuries from overseas and causing the dollar to strengthen dramatically.

In my comment on the Fed’s increase in December I wrote: “If commodity prices remain weak, there will be a significant deflationary impact felt in several countries; China’s slowdown could continue to be a drag; and of course there is always the risk of a major war or confrontation.The US economy is doing quite well, but will not be immune to what is happening elsewhere in the world.”

Where are mortgage rates headed?
As I have pointed out, the “experts” have been consistently wrong, so their “forecasts” have really become guesses. 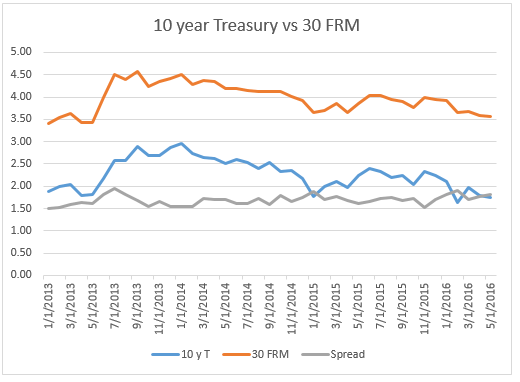 Summary
While the US economy is stronger than those of most of other countries, it is growing at only a moderate 2 – 2.5% per annum. Elsewhere there are many headwinds, which make it hard – at least for this observer – to see the basis for interest rate increases in the near future.
Trying to guess the bottom in mortgage rates is like trying to time investment in the stock market – great fun, but rarely successful.
What we can say is that mortgage rates today are extremely low by historic standards and to some extent are offsetting home price increases in the last few years.

If you are considering selling your home please contact me on 617.834.8205 or Andrew.Oliver@SothebysRealty.com for a free market analysis and explanation of the outstanding marketing program I offer.

Read  Which broker should I choose to sell my house?