What does Federal Reserve rate increase mean for Mortgage Rates?

For the fourth time in the last 18 months the Federal Reserve increased short-term interest rates by 0.25% this week, bringing the total increase over this period to 1.00%.

After each increase in the Fed Funds rate (FF), I point out that the FF does not directly affect the  30 year Fixed Rate Mortgage rate (FRM), whose price is more closely related to the yield on the US 10 year Treasury (10T).

Let me illustrate this point in one chart: 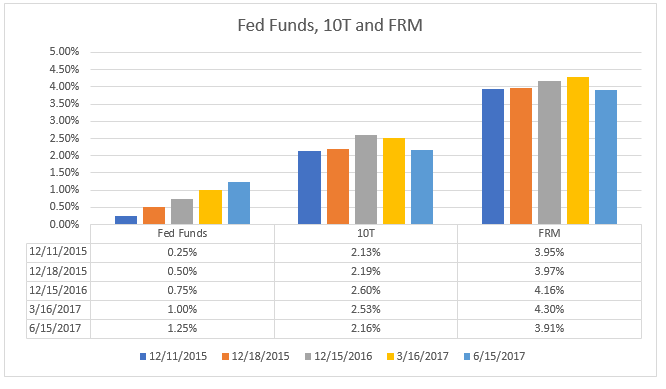 Note that while the FF rate has increased by 1% since late 2015, the yield on both 10T and the FRM are almost exactly where they were before the first FF increase. The yield on 10T increased sharply followed the 2016 Election which generated market expectations of faster economic growth driven by tax cuts and other fiscal policies. As time has gone by with no new fiscal measures passed, so the expectation of faster growth has waned and the yield on 10T has fallen back.

The chart clearly shows that there is no direct link between the movement in FF and FRM.

Now let’s look in slightly more detail.
Which rates are based upon the Fed Funds rate?

The prime rate directly follows the FF rate, is set by banks and is consistently at a margin of 3% above the FF rate. Immediately after the increase in the FF rate, all the major banks raised their prime rates from 4.00% to 4.25%.

Fixed Rate Mortgages
FRM rates are set by individual banks and are dictated by market conditions. Most conforming mortgages are sold to investors in the form of mortgage-backed securities. The yield demanded by investors is most closely linked to  a premium (spread) over the yield on US Treasury 10 year Notes (10T). The yield on 10T is often seen as an indication of the strength of the US economy, although it can also be influenced by geo-political factors which can cause a flight to safety (foreign buying of US Treasuries) in times of uncertainty.

When the Fed first increased rates in December 2015, the yield on 10T was around 2.25%. In my comment I wrote: “If commodity prices remain weak, there will be a significant deflationary impact felt in several countries; China’s slowdown could continue to be a drag; and of course there is always the risk of a major war or confrontation. The US economy is doing quite well, but will not be immune to what is happening elsewhere in the world.” At the time of writing nobody had coined the phrase Brexit, the impact of which in June 2016 caused a flight to quality which drove the yield on 10T down to 1.4% and FRM to under 3.5%.

By the time of the November Election the yield on 10T was around 1.85%. In Why the Election drove mortgage rates up I explained the reasons for the post-Election spike to 2.6%. I wrote: “The Election changed the outlook for growth and inflation in 2017, not just because Mr.Trump was elected President but because the Republican Party retained control of Congress, indicating that its pro-growth fiscal policies would likely be enacted into law. That was the basis for the sharp jump in the stock market and the sharp fall in the bond market, causing yields to spike.  The downside risks to the optimistic forecasts for 2017 are that fiscal policy ( tax cuts, less regulation) gets delayed or bogged down in the other “stuff” going on, or that a major geopolitical event occurs somewhere in the world.”

The Fed has forecast 3 rate increases in 2017 – two have already occurred-  and there has been a general expectation that the US will see both faster economic growth and higher inflation in 2017. If these occur, then the Fed’s forecast may well turn out to be correct.

In that case  the yield on the key 10 year Treasury will increase somewhat and it is that which will lead to higher fixed rate mortgage rates. In recent weeks, however, the yield on 10T has dropped back to the level just after the Election as it seems increasingly difficult for Congress to enact any significant tax reform this year.

With the recent drop in 10T the FRM has dropped back under 4% again. That drop has offset some of the recent increases in housing prices.

Are you thinking about selling? Read  Which broker should I choose to sell my house?

Please contact me on 617.834.8205 or Andrew.Oliver@SothebysRealty.com for a free market analysis and explanation of the outstanding marketing program I offer