For the second time since the introduction of the iPhone (the first was in December 2015) the Federal Reserve (Fed) increased interest rates this week. The increase, like last year’s, was 1/4%. What does this mean for mortgage rates? The key is to understand which rates are impacted by the Fed Funds rate and which are dependent upon interest rates set by the market.

Which rates are based upon the Fed Funds rate?
30 year fixed rate mortgages (FRN) are not based on the FF rate, but are most closely tied to the yield on 10 year US Treasuries(10T). More on that in a minute.

The prime rate directly follows the FF rate, is set by banks and is consistently at a margin of 3% above the FF rate. Immediately after the increase in the FF rate, all the major banks raised their prime rates from 3.5% to 3.75%.

Fixed Rate Mortgages
FRM rates are set by individual banks and are dictated by market conditions. Since most traditional mortgages are sold to investors in the form of mortgage-backed securities, the yield demanded by investors is most closely linked to the yield on US Treasury 10 year Notes (10T). The yield on 10T is often seen as an indication of the strength of the US economy, although the yield can also be influenced by macro-economic factors such as a flight to safety which occurs in times of uncertainty.

When the Fed increased rates a year ago, the yield on 10T was around 2.25%. In my comment I wrote: “If commodity prices remain weak, there will be a significant deflationary impact felt in several countries; China’s slowdown could continue to be a drag; and of course there is always the risk of a major war or confrontation. The US economy is doing quite well, but will not be immune to what is happening elsewhere in the world.” And last December nobody had coined the phrase Brexit, the impact of which in June was to cause a flight to quality which drove the yield on 10T down to 1.4% and FRN to under 3.5%.

By the time of the Election the yield on 10T was around 1.85%. In Why the Election drove mortgage rates up I explained the reasons for the post-Election spike to 2.6%. Consequently, the FRM has jumped to 4.16% and appears likely to be close to 4.25% next week.. 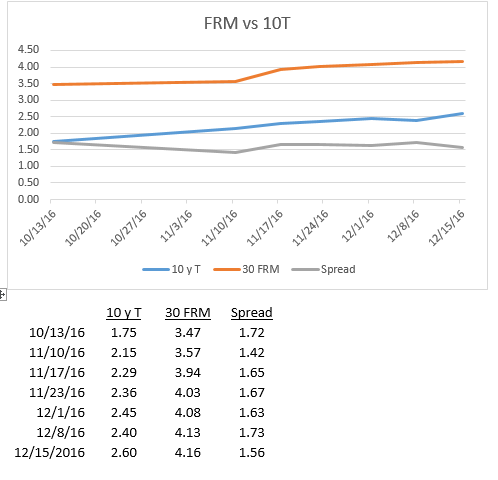 Will mortgage rates increase further in 2016?
Yes – probably. A year ago the Fed was expecting to increase short-term rates 3 times in 2016 as the economy expanded and inflation started to pick up. This did not happen and there was only the one recent increase. This week the Fed again forecast 3 rate increases in 2017, but there is a general expectation that the US will see both faster economic growth and higher inflation in 2017. If these occur, then the Fed forecast may well turn out to be correct

If the Fed is right it is likely that the yield on the key 10 year Treasury will increase and it is that which will lead to higher fixed rate mortgage rates. But again, note that the FRM is based on 10T not the Fed Funds rate. And the strength of the US dollar – it has just hit a 13-14 year high – will serve to dampen inflation, while fear of the impact on the dollar may cause the Fed to be less aggressive in raising rates.

Here’s a comment from HSH.com, “the country’s leading publisher of mortgage information since 1979″, whose weekly Market Trends letter I read every Friday:
” With an overall pattern that is most likely to be “firm to firming” in place for much of the year, we think that conforming 30-year fixed rates probably make it into the 4.625 percent to 4.75 percent range at some point during 2017 as a peak, but probably spending most of the time below the 4.5 percent level. Of course, expected upward pressure is predicated on lots of things going economically well, not just here but abroad, too. This is a happenstance that has been a bad bet in recent years, and may be again in ’17, too.”

What could happen to cause mortgage rates not to rise?
The Election changed the outlook for growth and inflation in 2017, not just because Mr.Trump was elected President but because the Republican Party retained control of Congress, indicating that its pro-growth fiscal policies will likely be enacted into law. That is the basis for the sharp jump in the stock market and the sharp fall in the bond market, causing yields to spike. Already we have seen a surge in optimism as I reported in Small Business Optimism Soars after Election.
We are still a month away from the inauguration of the new President and the markets are, as usual, anticipating events. The downside risks to forecasts for 2017 are that for some reason Congress does not pass the expected legislation or that a major geopolitical event occurs somewhere in the world.
At this stage, however, the odds suggest that we will see further increases in FRM in 2017.

Mortgages are still cheap
The guessing game – or forecasting, as economists like to describe it – of what will happen in 2016 should not disguise the basic fact that mortgage rates
today are historically cheap – and may not be as cheap in the months and years ahead. The first chart shows the decline in FRM over the last 25 years:

Adjustable Rate Mortgages (ARM)
Throughout the years of declining rates ARMs have been a very successful financing mechanism for those who understand the risks. With the change in outlook for mortgage rates, as highlighted in my Is this the end of ultra cheap mortgages? report right after the Election, this is a good time to look at ARMs and I shall write a separate report on them. Meanwhile, note that the 5/1 ARM rate this week was nearly 1% below that of the FRM.