Why aren’t mortgage rates even lower?

That might sound like a strange question when the latest Freddie Mac 30-year Fixed Rate Mortgage (FRM) rate is 3.58%, down from 4.5% at the beginning of the year and nearly 5% last Thanksgiving. And at the end of last year most pundits were forecasting that the FRM would breach 5% in 2019.

The FRM rate is influenced, not by short-term interest rates set by the Federal Reserve, but by the market. In particular, the FRM rate is a premium – or spread – to the yield on the US Government’s 10- year Treasury Note. That in turn is influenced by two major factors: the outlook for the economy (expanding businesses invest creating demand for money) and geopolitical events – the US dollar and US Treasuries are seen as a safe haven during times of uncertainty.

Add one more ingredient: most conventional mortgages are packaged and sold in bundles as mortgage-backed securities (MBS). The rate on the FRM is dictated by the yield buyers of MBS require.

While there have been fluctuations, quite wide at times, the spread – the difference between the yield on 10T and the FRM rate – has on average been steady in recent years. The chart below shows the average annual spread each year since 2005. 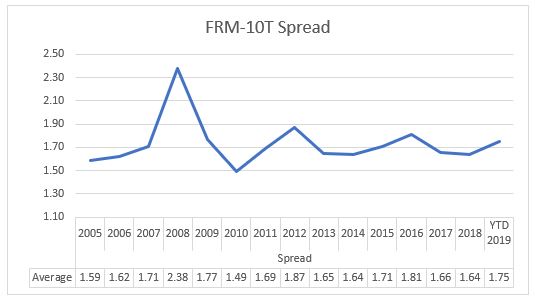 The spread has been between 1.50% and 1.90% in all years since 2005 – except 2008. And you don’t need reminding that 2008 saw the financial crisis brought on by the collapse of Lehman in September of that year – and, of course, by the collapse of the sub-prime mortgage market. With home prices tumbling and foreclosures exploding, it is not surprising that buyers of MBS demanded a higher risk premium – or spread. That spread went from around 2% in mid-2008 to nearly 3% late in the year, before dropping back under 2% in April 2009.

In general terms, the yield on 10T moves more quickly than does the FRM rate, so that when interest rates move sharply lower- often driven by geopolitical events – it takes a while before the spread returns to its normal level. But it always does.

The second table shows the average spread by year since 2005 together with the number of weeks when the spread has exceeded 2%. 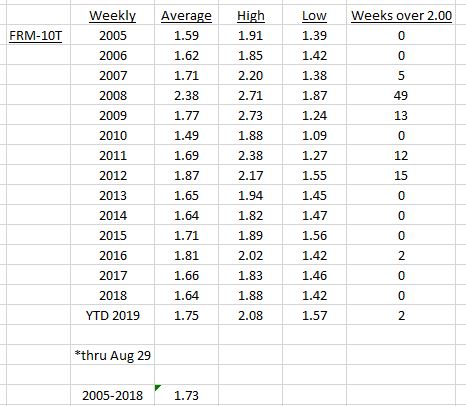 In last week’s article Do you know why the Chinese like doing business with you? I concluded: “The best outcome for both the US and the rest of the world would be an end to the tariff war, which would lead to renewed confidence, increased capital spending and continued economic growth. This, in turn, would increase the demand for money and lead to higher interest rates and higher mortgage rates. Higher rates would, in fact, be a positive sign for both the economy and the housing market.”