Earth to Federal Reserve: What are you waiting for?

As the debate amongst economists continues as to whether the Federal Reserve will raise interest rates 3 times, 5 times or 7 times this year, the Federal Reserve continues to do….nothing.
Giving the market advance warning about changes in monetary policy is an excellent idea, but the lack of flexibility from the Fed is alarming. The Fed has consistently said that its decisions as to the timing of the end of its bond buying program – which has glutted stock and real estate markets with cash – and the start of the “lift-off” in interest rates would be “data dependent.”
Well, my question is this: what data are you seeing Mr. Powell that the rest of us are missing? And by the rest of us I mean professional and award-winning economists – and me..

In March 2021, 11 months ago, Chairman Powell said: “We’re not going to act pre-emptively based on forecasts for the most part, and we’re going to wait to see actual data. And I think it will take people time to adjust to that, and the only way we can really build the credibility of that is by doing it.”

Also in March 2021, I published “Party on, dude” says the Federal Reserve which included:
Former Federal Reserve Chair William McChesney Martin, Jr famously said: “The Federal Reserve…is in the position of the chaperone who has ordered the punch bowl removed just when the party was really warming up.”
This week, current Fed Chair Jerome Powell in effect said “party on, dude.” As the New York Times commented: “The official view of the central bank’s leaders now is that it has been an overly stingy host, taking away the punch bowl so quickly that parties were dreary, disappointing affairs.
The job now is to persuade the world that it really will leave the punch bowl out long enough, and spiked adequately — that it will be a party worth attending. They insist punch bowl removal will be based on actual realized inebriation of the guests, not on forecasts of potential future problematic levels of drunkenness.”

I just hope that those attending Mr. Powell’s prolonged party are not planning to drive home.

In that March article I also wrote: “The test for the Fed will come in future months as the economy recovers. The market may demand higher interest rates, even as the Fed will want to keep them low to finance continuing federal deficits.”

By June 2021 I was writing: “Should inflation prove to be more persistent than the Fed expects, then it is likely that the Fed will have to start to increase interest rates sooner and move them up more quickly than it currently expects. And mortgage rates would follow.

I have to admit that I struggle to understand how low interest rates, which boost asset classes such as stock prices and real estate, are helping to boost employment. Lower interest rates benefit those who own assets which appreciate.

I would like to see the Fed start to reduce (taper) its bond buying, while encouraging Congress to focus on removing barriers to employment – by providing increased child care allowances, for example. In other words, deal directly with the problem rather than hoping that benefits will trickle down somehow.”

And my most recent post on this subject was Can the Federal Reserve prevent a Recession? in which I wrote: “Since World War II there has been a consistent pattern of the Federal Reserve hiking interest rates to control inflation and thereby triggering a recession. With the Fed finally acknowledging in late November that inflation was not transitory and committing to end its bond buying spree and also raise interest rates, will it be able to avoid a recession? Can this time be different?”

I also wrote: “It is important to understand that the Fed controls short-term rates and that mortgage rates are based upon the yield of the 10-year Treasury, where the yield is set by market demand. I have been forecasting – guessing – that mortgage rates will reach 4% this year as I expect that interest rates will need to be raised aggressively to ward off stubbornly persistent inflation. But if the result is indeed a recession later this year then interest rates may ease back later.

The chart below shows that the 30-year mortgage rate id now back to its pre-COVID level and is set to move higher next week – unless Mr. Putin decides to invade Ukraine, an action which would likely drive investors to buy Treasuries and force rates down in the immediate term. 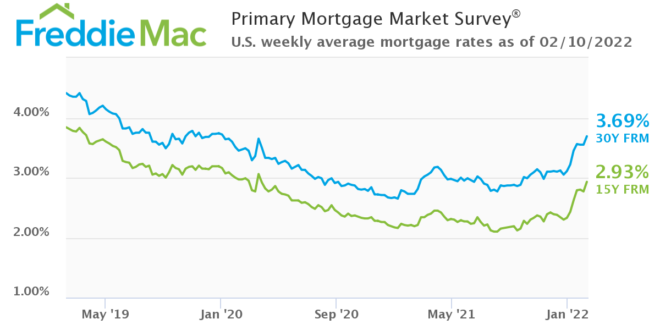 Summary
The danger of being slow to end the bond buying program and slow to increase short-term interest rates is that the Fed will also be slow to lower rates if economic growth and inflation slow – and thus cause a recession. Right now the US economy is expanding rapidly and is fairly close to the current level of full employment. I hope that the Fed manages successfully to manage interest rates to slow down the economy without driving it into recession. An early 50 basis point rise in the Fed Funds rate would make me more confident that it will succeed.

“If you’re interested in Marblehead, you have to visit the blog of Mr. Andrew Oliver, author and curator of OliverReports.com. He’s assembled the most comprehensive analysis of Essex County we know of with market data and trends going back decades. It’s a great starting point for those looking in the towns of Marblehead, Salem, Beverly, Lynn and Swampscott.”
__________________