How far Behind the Curve is the Federal Reserve?

In March 2020, as the impact of COVID-19 was being felt, the Federal Reserve cut the Fed Funds rate by 50 basis points ( 0.5%) on March 3 and followed that with a 100 basis points (1%) cut on March 15th – a total of 1.5% in under two weeks. This emergency action was decisive and instrumental in preventing a financial disaster. But the economy quickly bounced back with a huge rebound in Q3 2020. The emergency was over.

The Fed, however, kept pumping huge amounts of cash into the economy. Eventually, the market decided that the Fed was behind the curve and market rates took off. Yet the Fed has been slow – make that very slow – to respond. This chart shows interest rates on January 31st 2020, the trading day before COVID-19 was declared to be a public health emergency in the US, and this Friday after the announcement that the Consumer Price Index rose 8.6% in May from a year earlier. 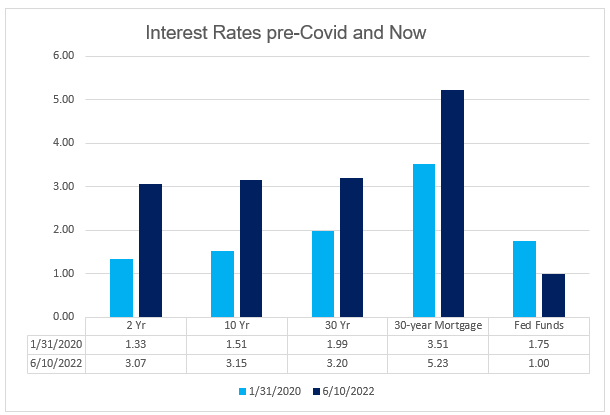 Does anything strike you about this chart? Such as the fact that all the market interest rates are up anywhere from 50% to 130% – and the Fed Funds rate is still way down from its pre-COVID level.

In May Fed Chair Powell said that the Fed was moving “expeditiously” to bring inflation back down. Really? It took 13 days in 2020 for the Fed Funds rate to be cut from 1.75% to 0.25% – and it took 49 days to recoup just half of that reduction.

In an interview with Marketplace on May 12 Powell acknowledged that the central bank could have moved faster to raise interest rates and cut inflation.  “If you had perfect hindsight you’d go back, and it probably would have been better for us to have raised rates a little sooner,” Powell said. “I’m not sure how much difference it would have made, but we have to make decisions in real time, based on what we know then, and we did the best we could.”

It seems to me that we are  supposed to believe that there was no evidence that the economy was booming and that inflation was rapidly rising. But in fact, renowned economists from Larry Summers to Mohammed El-Erian to Andrew Oliver (well the first two are renowned) started calling for the Fed to end Quantitative Easing and start increasing rates a year ago.

I will quote from my blog posts. In March 2021 in “Party on, dude” says the Federal Reserve I wrote: Former Federal Reserve Chair William McChesney Martin, Jr famously said: “The Federal Reserve…is in the position of the chaperone who has ordered the punch bowl removed just when the party was really warming up.” This week, current Fed Chair Jerome Powell in effect said “party on, dude.”
Powell stated: “We’re not going to act pre-emptively based on forecasts for the most part, and we’re going to wait to see actual data.”
I wrote “The test for the Fed will come in future months as the economy recovers. The market may demand higher interest rates, even as the Fed will want to keep them low to finance continuing federal deficits.”

In June 2021 in Are mortgage rates heading up or down? I quoted Powell as saying: “Our expectation is that these high-inflation readings that we are seeing now will start to abate. And it’ll be like the lumber experience. Prices that have moved up really quickly because of the shortages and bottlenecks and the like, they should stop going up. And at some point, they, in some cases, should actually go down. And we did see that in the case of lumber.”
I wrote: “Should inflation prove to be more persistent than the Fed expects, then it is likely that the Fed will have to start to increase interest rates sooner and move them up more quickly than it currently expects.” And “I would like to see the Fed start to reduce (taper) its bond buying, while encouraging Congress to focus on removing barriers to employment – by providing increased child care allowances, for example.”

By January 2022 I was writing in Can the Federal Reserve prevent a Recession?: Since World War II there has been a consistent pattern of the Federal Reserve hiking interest rates to control inflation and thereby triggering a recession. With the Fed finally acknowledging in late November that inflation was not transitory and committing to end its bond buying spree and also raise interest rates, will it be able to avoid a recession? Can this time be different?”

My frustration showed in February 2022 in Earth to Federal Reserve: What are you waiting for?: “As the debate amongst economists continues as to whether the Federal Reserve will raise interest rates 3 times, 5 times or 7 times this year, the Federal Reserve continues to do….nothing.
Giving the market advance warning about changes in monetary policy is an excellent idea, but the lack of flexibility from the Fed is alarming. The Fed has consistently said that its decisions as to the timing of the end of its bond buying program – which has glutted stock and real estate markets with cash – and the start of the “lift-off” in interest rates would be “data dependent.”
Well, my question is this: what data are you seeing Mr. Powell that the rest of us are missing?

And finally in Federal Reserve: “Make me responsible…. but not yet”
With apologies to St. Augustine, the gist from the release this week of the minutes of the last meeting of the Federal Reserve Open Market Committee (FOMC) was that, yes, inflation is worse than we expected, and yes, we need to raise interest rates and, yes, we need to sell some of our huge portfolio of Treasuries and Mortgage-Backed Securities, and we will …soon…I promise.
“Participants observed that, in light of the current high level of the Federal Reserve’s securities holdings, a significant reduction in the size of the balance sheet would likely be appropriate,” the meeting summary stated.
The minutes show concern about inflation and financial stability though members urged “a measured approach” to tightening monetary policy. FOMC members noted that “inflation was beginning to spread beyond pandemic-affected sectors and into the broader economy.”
No kidding.

Comment
Is the Fed behind the curve? Yes. Can it catch up? Not, in my opinion, with continued monthly increases of 50 basis points. The danger is that the economy is already slowing and the Fed will be raising rates into that background. Continuing on the slow path may well ensure a recession either later this year or next – next if the consumer continues to spend, which may be debatable. Retail stores are already reporting a shift from discretionary to essential spending – and a $5 gas price is a huge negative influence on consumer confidence.

I continue to fail to understand why the Fed felt able to cut its fed Funds rate by 1.5% in less than two weeks, but has been tip-toeing when it comes to raising rates again. Let me say again – the COVID-crisis ended in the summer of 2020. The continued pumping of massive amounts of cash into the economy inflated asset prices and led to inflation. Why was this a surprise to the Fed? Yes, there were other factors – supply chain issues, Ukraine, China lock down. But as somebody once said, “there’s always something.”

Mohamed El-Erian said today that the Fed has lost control of the inflation dialogue. He believes the Fed needs to increase its Fed Funds rate by 1% next week to regain control. Does it have the chutzpah to do this? We’ll find out next Wednesday.

And read these recent articles:
How quickly are houses selling?
Have Home Sales slowed?
June Housing Inventory: still way below 2020 levels.
Swampscott House on over 1 acre with HUGE potential
Marblehead Neck Oceanfront New Listing
Why are Mortgage Rates so high?
Time to Consider an Adjustable Rate Mortgage
The Federal Reserve and Mortgage Rates
Federal Reserve: “Make me responsible…. but not yet”
How Marblehead’s 2022 Property Tax Rate is calculated
Essex County 2022 Property Tax Rates: Town by Town guide
Guide to Buying and Selling in Southwest Florida

If you – or somebody you know – are considering buying or selling a home and have questions about the market and/or current home prices, please contact me on 617.834.8205 or ajoliver47@gmail.com.

“If you’re interested in Marblehead, you have to visit the blog of Mr. Andrew Oliver, author and curator of OliverReportsMA.com. He’s assembled the most comprehensive analysis of Essex County we know of with market data and trends going back decades. It’s a great starting point for those looking in the towns of Marblehead, Salem, Beverly, Lynn and Swampscott.”
__________________